Amitabh Bachchan’s grandson Agastya Nanda, who is one of the most loved star kids in town, recently posted interesting pictures on his Instagram account. Soon after he posted the pictures, his handle attracted a lot of eyeballs. From Abhishek Bachchan, Navya Naveli, Suhana Khan to Alia Bhatt, everyone was quick to drop comments on his pictures.

Agastya posted a series of pictures that featured his friends and sister. On one of his pictures, his sister Navya asked, “Are you trying to be edgy?” In another comment, she asked him to ‘explain’. On this, Alia commented, “@navyananda hahaha exactly PLS explain your actions.” In the second picture, he can be seen striking a cool picture to which Suhana commented, “unfollowing”. Have a look: 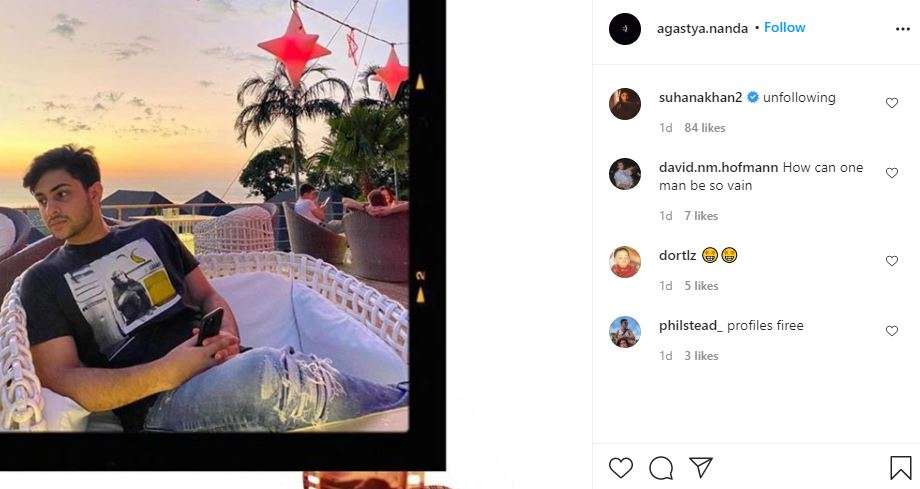 Suhana and Agastya are good friends and they are often seen posting pictures on social media. Agastya is the son of Nikhil Nanda and Shweta Bachchan Nanda.

Earlier during the lockdown, Big B shared a cool picture with his grandson where they were seen hitting the gym together. Sharing the picture with fans, he had written, “Fight .. fight the fit .. fit the fight .. reflective mirrors , laterally inverted imagery .. and the inspiration with Grandson ..” Have a look: